The challenge of connecting bamboo

Building with bamboo is becoming very popular throughout the world with many prominent architects now using bamboo as a construction material. This is evident from design blogs and websites, which showcase increasing number of bamboo buildings. Bamboo architecture has taken a big leap in developing countries in recent years and has become a symbol of eco-friendly design and sustainability led by buildings like the Green School in Bali. 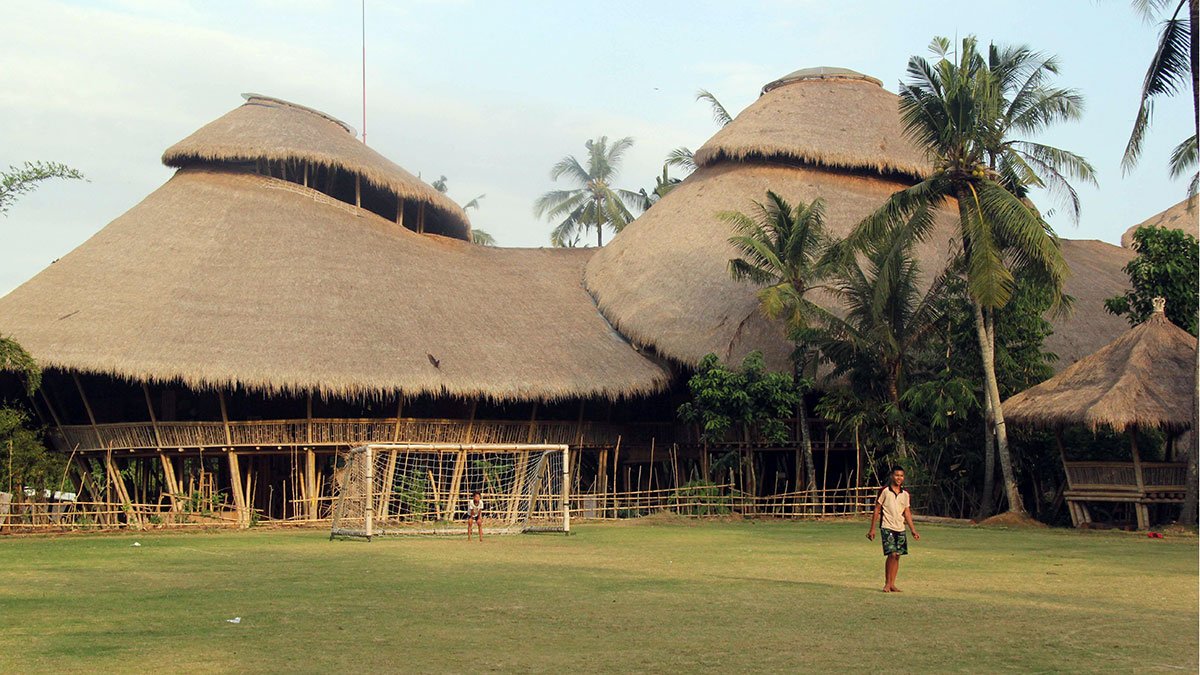 In western countries such as Australia use of bamboo is gaining popularity with greater number of household goods now made out of bamboo. Bamboo floorboards are also very popular as a sustainable alternative and are used extensively in renovations and new construction.  People are getting more aware of the potential of bamboo as a sustainable material and are interested in learning and doing more with bamboo. Lack of building regulations for bamboo makes it difficult to build large buildings out of bamboo in Australia but there are plenty of opportunities to build smaller structures. Majority of the people who are interested in building with bamboo find it challenging as there are no specific joineries and systems to use and treated bamboo poles are expensive and limited in supply.

Challenges of building with bamboo in Australia

At Giant Grass our focus is on promoting the use and value addition of bamboo in construction industry. To achieve this we have used hands-on construction workshop as a model of teaching people how to build with bamboo whilst exploring new designs and connections. Over the past 10 years we have conducted various bamboo workshops with university students, tribal people, kids and community members in general. During these workshops we have used the process of experiential learning where we have tested our design, built various structures, tested connection details and used our learnings for future design. 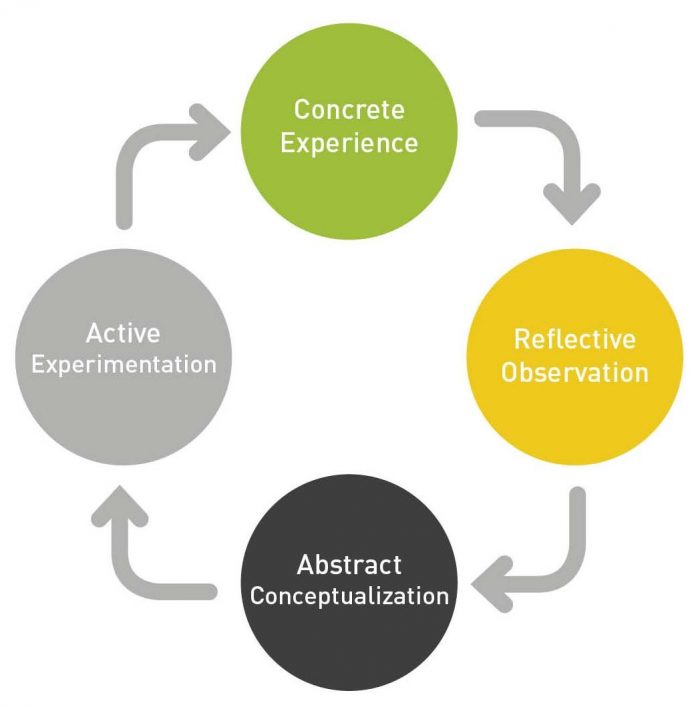 One of key challenges that inhibit the use of bamboo is connecting bamboo poles. Bamboo has a hollow cylindrical form with varying wall thickness and taper. The fiber in bamboo runs along the length with only the nodes providing lateral strength making it susceptible to cracking under stress.  The most common timber construction system details such as nails or screws increase the chance of cracking with a risk of them becoming loose. This makes such connections unsuitable for use with bamboo.

There are various ways of connecting bamboo. Traditionally tying with natural fiber and using bamboo pins was the most common approach. In the 20th century Simon Velez along with Marcelo Villegas pioneered the use of steel bolts and concrete, which changed how bamboo structures are built. As part of the workshops we have tried various connection details, which are discussed below.

Traditionally lashing was the prominent form of bamboo connection. Generally natural fiber rope like sisal or palm is used for lashing but it is also possible to use polypropylene ropes. There are various types of lashing knots but the most common one include square lashing, diagonal lashing and shear lashing. Although it is possible to use lashing on its own many times it is used in combination with bamboo pins making the joints stronger. 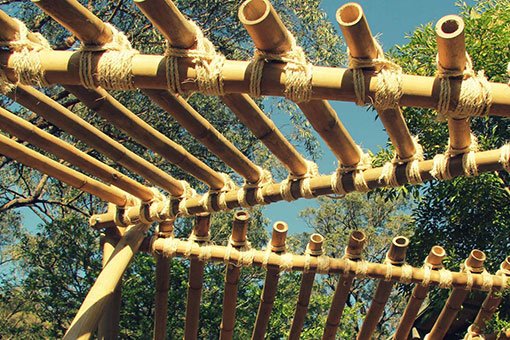 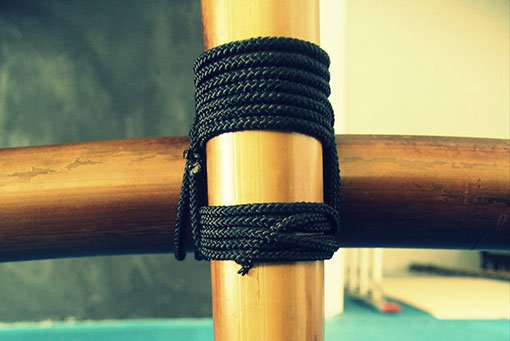 Lashing provides great flexibility in connecting bamboo but it is very time consuming and requires highly developed skill, otherwise the rope tends to get loose over a period of time. Natural fiber ropes need to be replaced every few years if they are exposed to the elements.

The bamboo poles are connected using threaded rod with nuts and washers at both ends. Use of steel bolts allows creating complex connections, which are not possible with lashing. Concrete is poured inside the bamboo internode for the joints that have high shear stress. 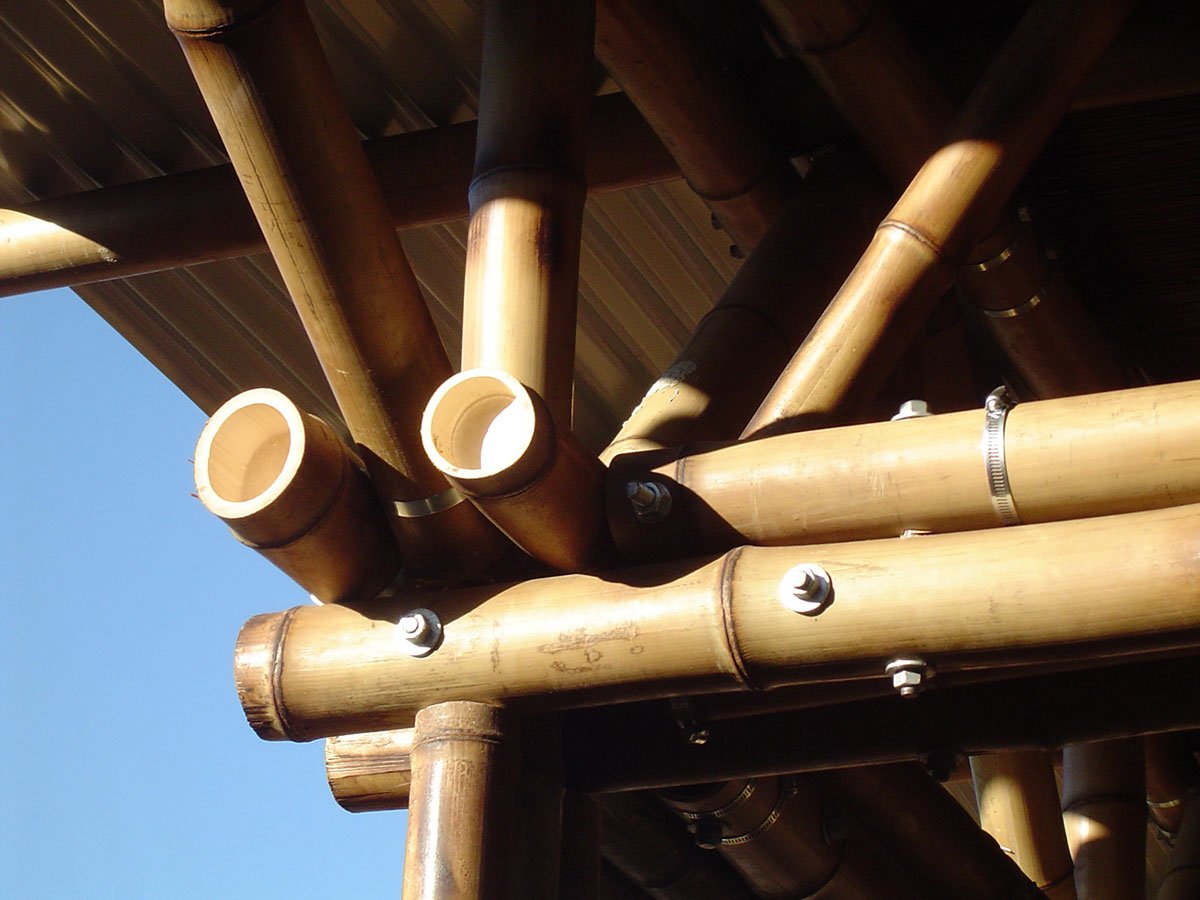 Steel bolts make building a bamboo structure much quicker than lashing. Use of bolts requires a good understanding of structural design principles and the principle of triangulation, as each joint is a pin joint. Once the structure is built it is difficult to remove and replace poles.

Many people have used clamps to connect bamboo and create structures. As  the name suggested the connectors are in the form of a clamp that hold to the external of the bamboo poles. Majority of the time these clamps are custom fabricated for a particular project. We used standard fencing clamps for building a Bamboo Greenhouse as an experiment to check how difficult it would be to build with standard connector. 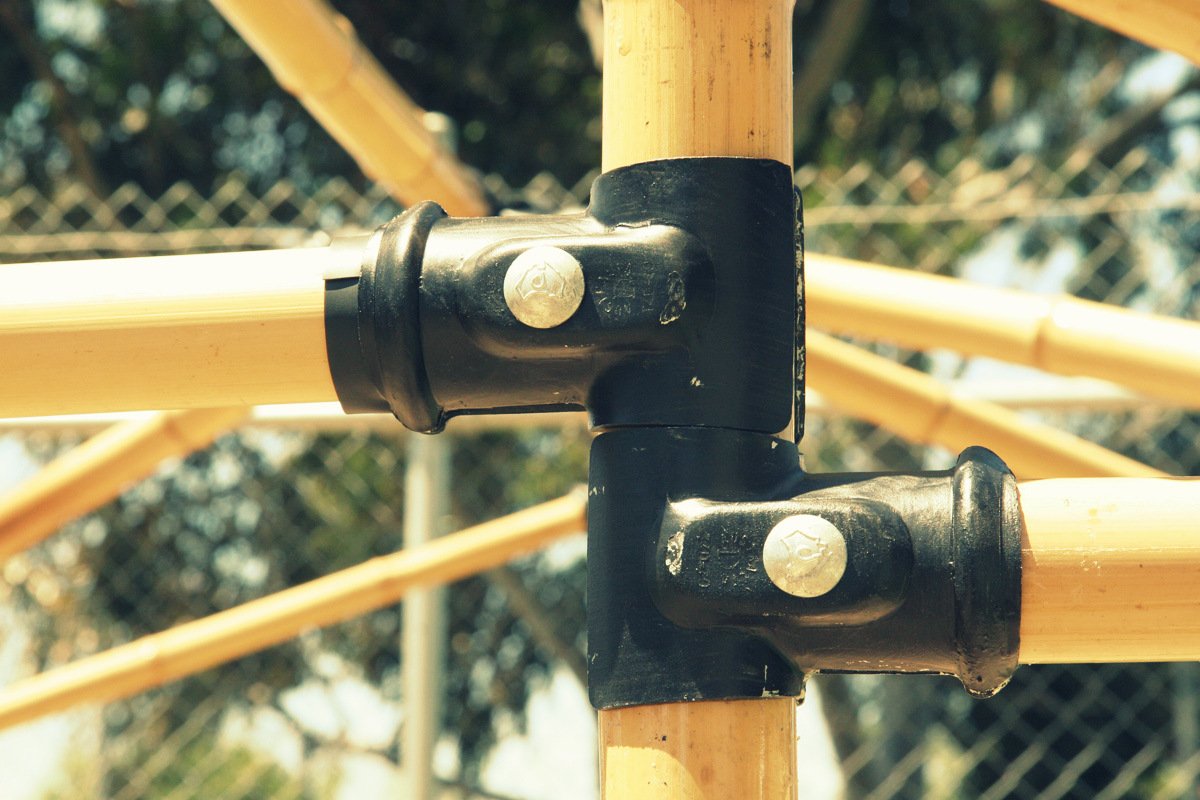 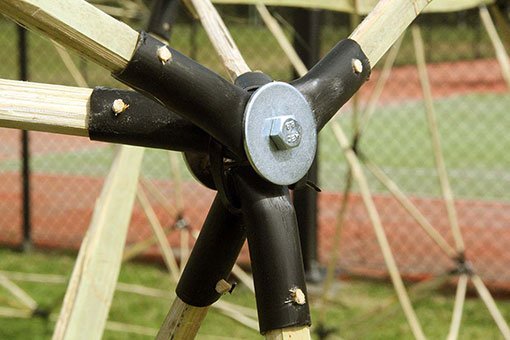 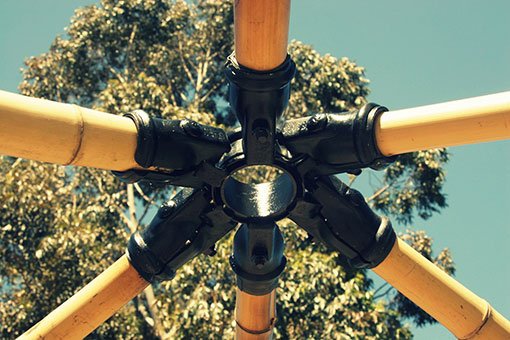 Brackets or plates are used to connect the bamboo in the same plane and useful to build trusses or other similar structural elements. Brackets are generally L-shaped pieces made out of steel and bolted to bamboo to create 90o connections. Plates can be made from steel or plywood and are used to connect various bamboo poles using bolts. 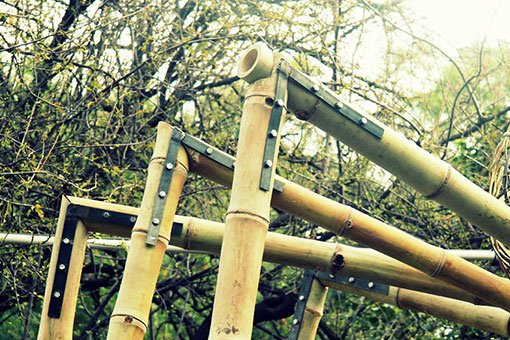 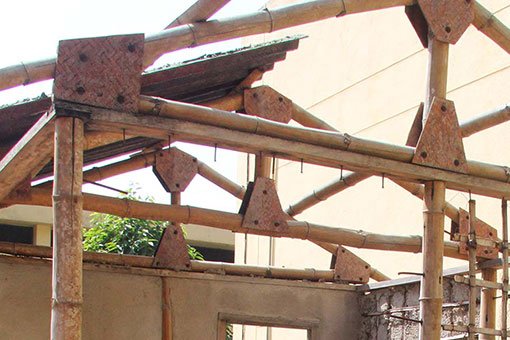 It is difficult to find steel brackets or plates for use with bamboo; generally they need to be custom fabricated. They are generally useful for some structural components but mainly in 2 dimensional planes.

The Bamboo Clamp Connector is designed to make building with bamboo easier and faster. It uses the best aspects from various types of connections discussed above. The connector is designed for small to medium sized structures and mainly for Do It Yourself (DIY) use.

The connector uses a clamp effect to connect bamboo. The clamp is made of four prongs making it suitable to be used with different sized bamboo and overcome the issue of non-standard diameter and taper.

The design has been developed after extensive prototyping of various options. The final design is a balance of functionality and weight creating a joint that is flexible and suitable for most options. 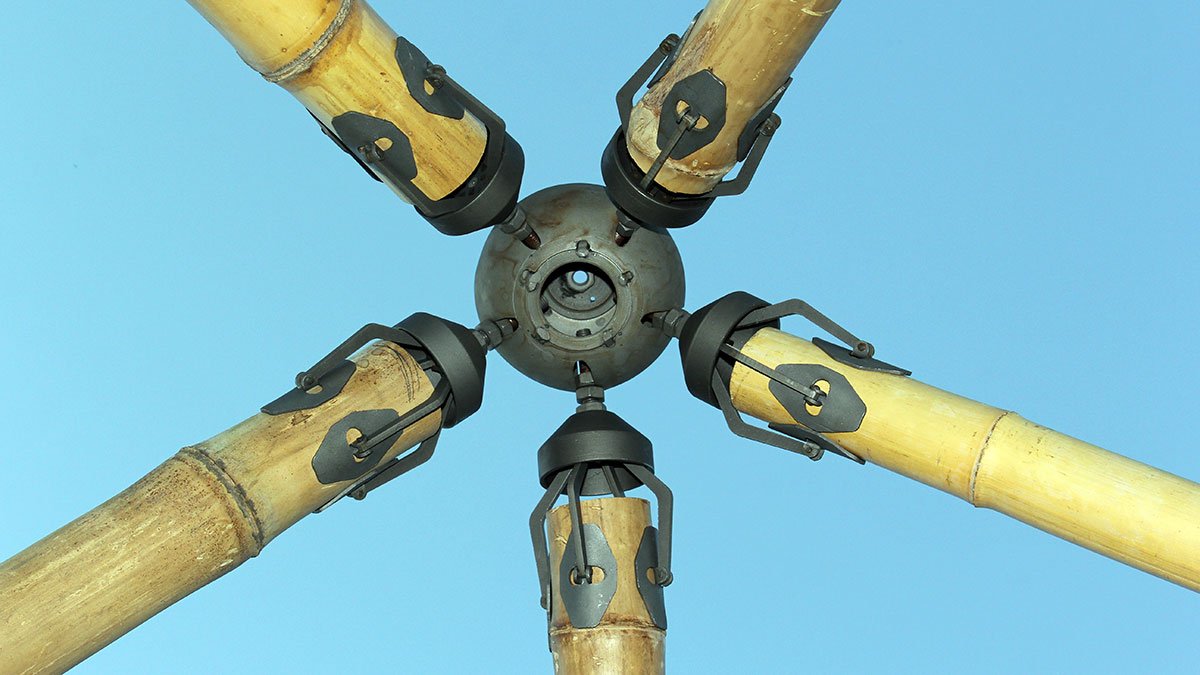 The connector includes various components that make it modular and flexible. All these components combine to create various design opportunities that are illustrated in the next section. 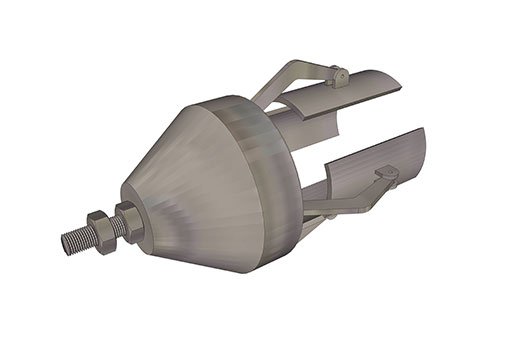 Clamp is the main component that is fixed at the ends of the bamboo pole. The clamp includes four prongs that attach to the bamboo pole and are tightened by cone shaped cup. These clamps are then connected to a central ring. 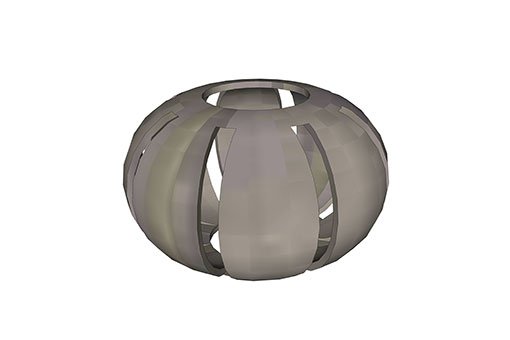 The ring is a curved edge and has vertical slots to connect the clamps. The curved surface provides maximum flexibility so that bamboo poles can be connected at different angles. The ring comes with various options including 5, 6 and 8 slots. 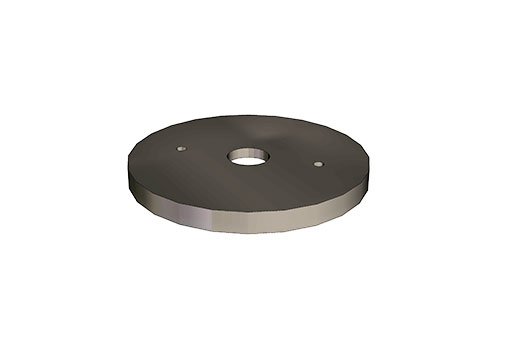 The circular disk attaches to the ring allowing bamboo poles to be connected perpendicular to the ring. This increases the possibility of the type of structures that can be built with the connection and allows for the construction of standard post beam type of structures. 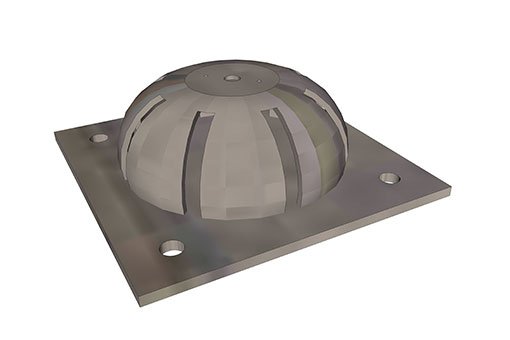 A variation of the central ring the footing plate allows for the structure to be fixed to the ground temporarily or permanently using pegs or bolts.

The modular and flexible nature of the Bamboo Clamp Connector provides various design opportunities. The components can be connected in different combinations to create a variety of joints. 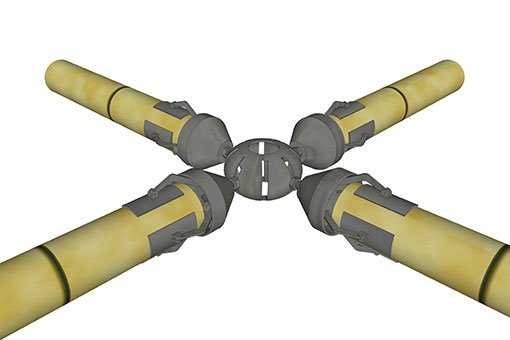 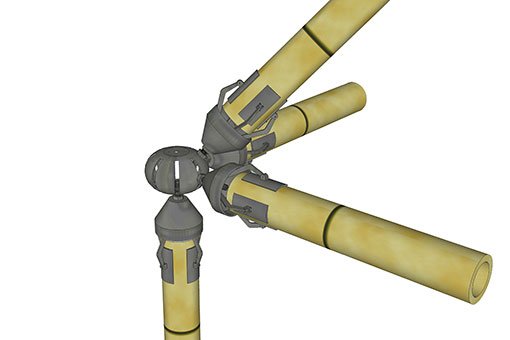 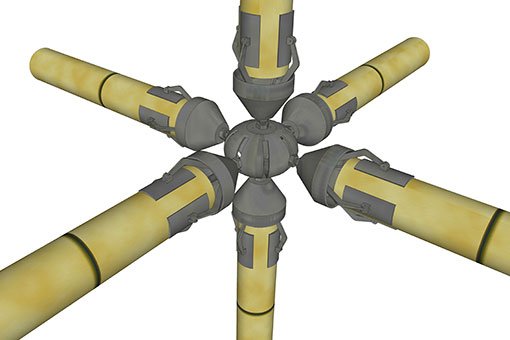 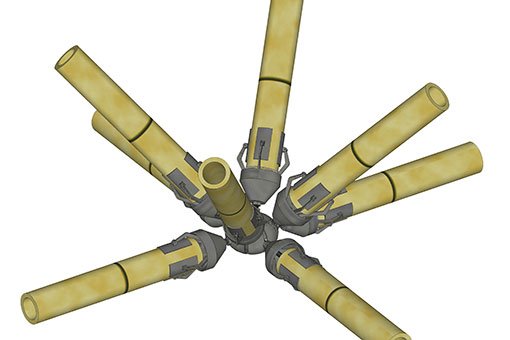 The connection system makes it very easy to build simple geometric structures like a square gazebo. The framing can then be covered with different roofing materials of temporary or permanent nature. 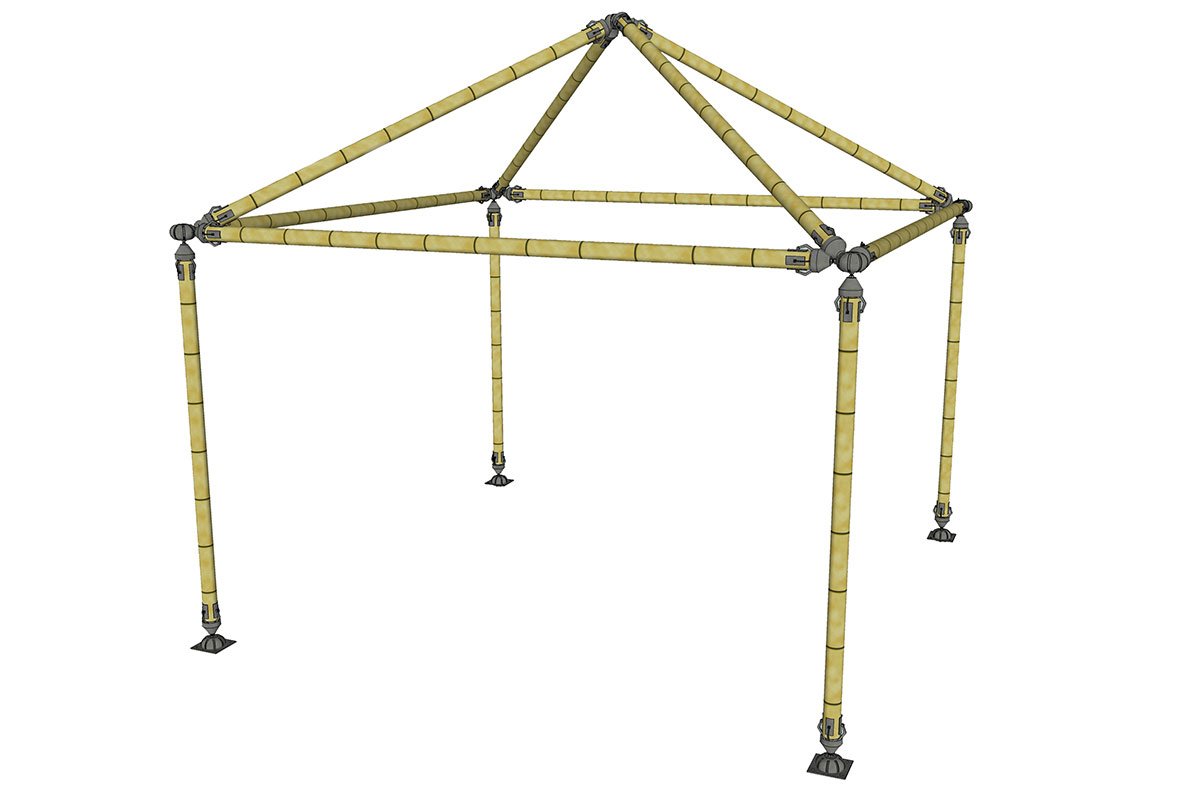 We also built an icosahedron frame using the connectors to test them out and it was pretty easy and quick to erect the frame. It took much less time to build it using the connectors compared to what it would have taken using traditional techniques like bolting or lashing. Plus, we needed less bamboo poles to create a structural stable frame. 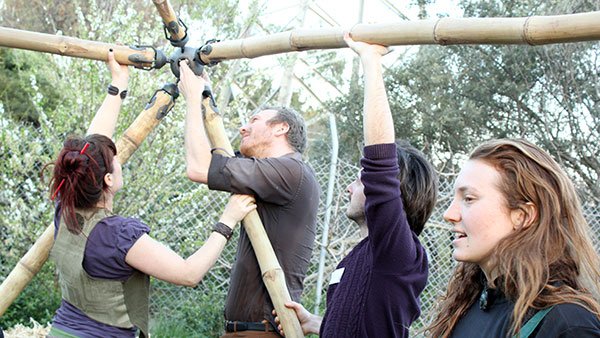 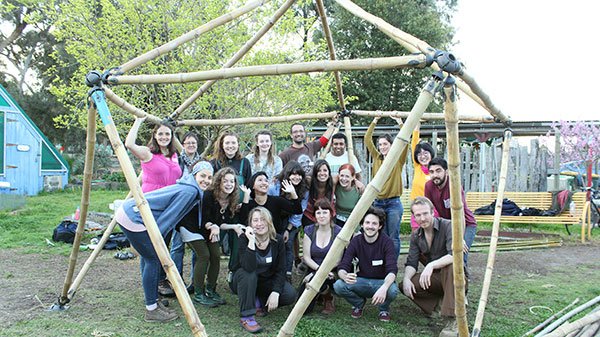 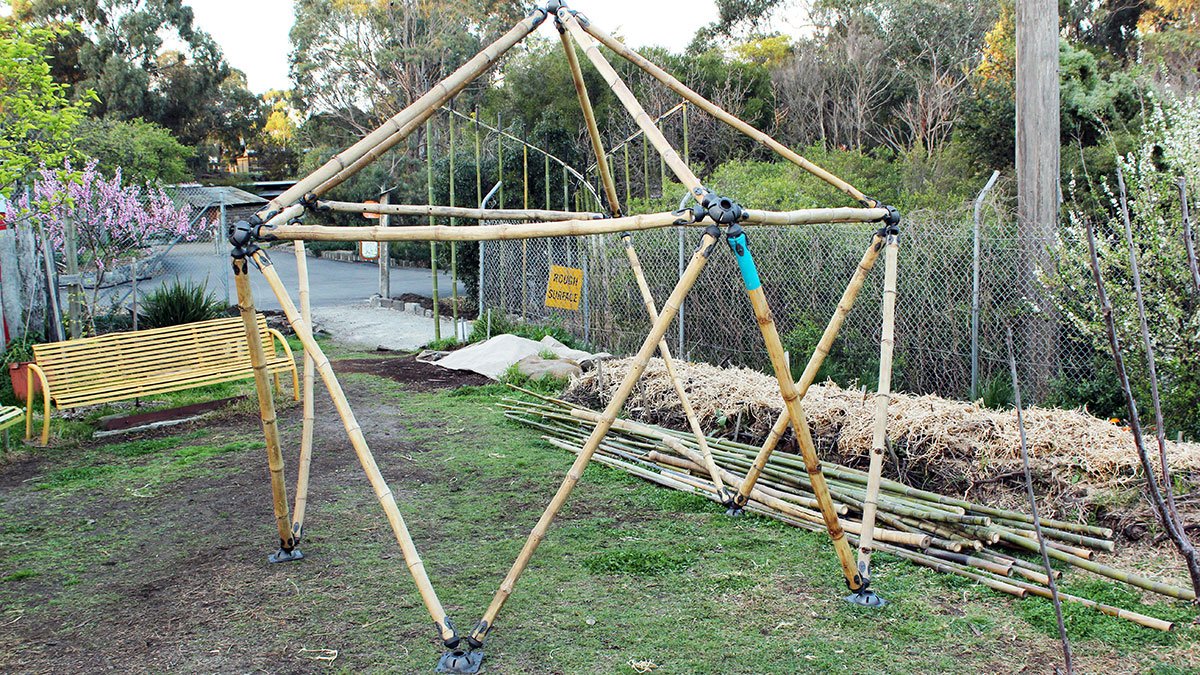 The connector has various advantages over traditionally used connection systems. Some of the key benefits of the connector include:

This article was originally published as a research paper for World Bamboo Congress  2015. It has been slightly updated for the blog post with some new images of the Universal Bamboo Connector.

Munir is the Co-founder and Design Director of Giant Grass with a keen interest in sustainability and good design. Over past 17yrs he has designed a wide variety of projects includings cities, streets, buildings, structures, furniture, toys and much more. He likes to get hands-on making things using bamboo and other natural materials and share is experience through the blog posts.

Use of triangles is one of the fundamental principles for bamboo construction which is commonly used in most bamboo structures for stability and rigidity.   Keeping with our principle of exploring new designs and connections in every project we decided to challenge the notion of using triangulation for structural stability. 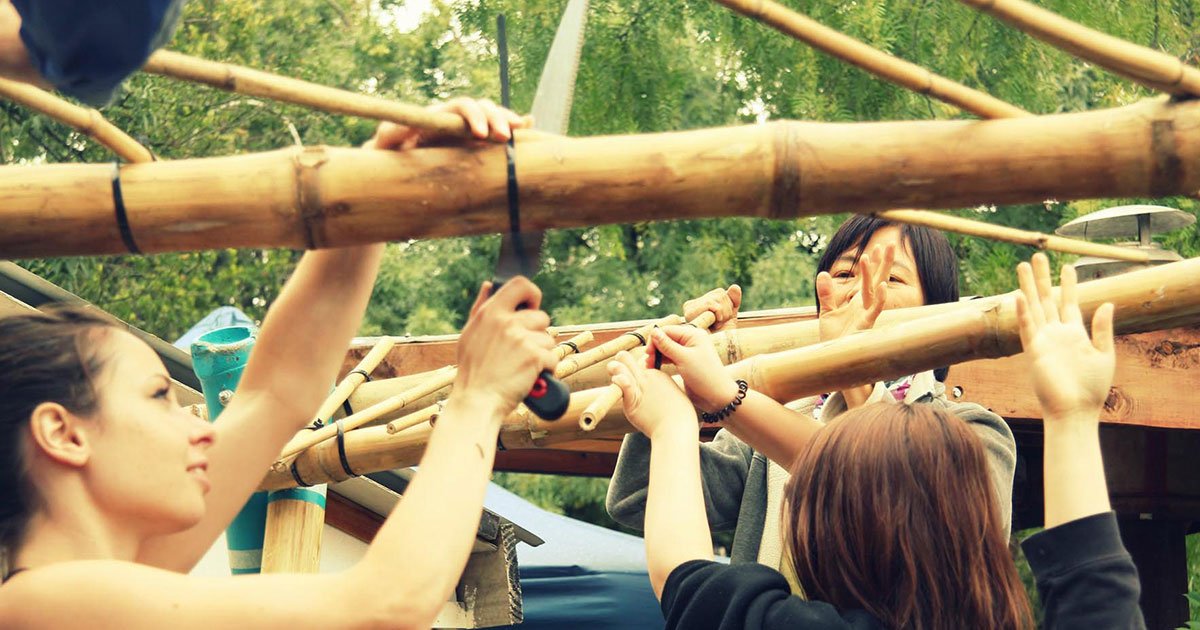 Get new blog posts in your mail box as soon as they are released.

You have Successfully Subscribed!